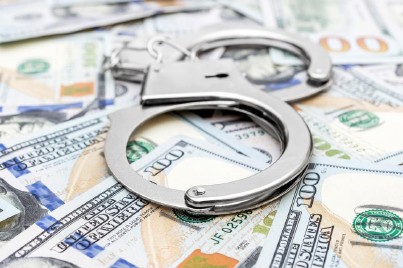 Police and prosecutors can use civil forfeiture to take property without criminal charges, a new ... [+] GETTY
Nassir Geiger spoke with the wrong person at the wrong time and it cost him hundreds of dollars and his car. Nassir was a victim of Philadelphia’s predatory civil forfeiture scheme that operated from a shady “courtroom” at City Hall. For years, police and prosecutors seized cash, cars and even homes and then took the property for themselves. Worse still, new data show that the police preyed on people in minority and low-income areas—in other words, people who could least afford to fight back.

Nassir’s troubles began when he stopped to say hello to a friend at a McDonald’s in northeast Philadelphia. What Nassir didn’t know was that the friend had just been arrested for drug possession. A few minutes after ending the conversation and driving away, Nassir was pulled over. His car was searched and although no drugs or even drug residue were found, the officers seized the car and $580 cash because they found empty ziplock bags.

The police gave Nassir a receipt for only $465 rather than the full amount taken and no receipt for his car. Nassir’s court-appointed attorney recommended that he take a plea deal that would result in a clear record if he paid a $200 fine and completed 20 hours of community service. This plea deal didn’t include the government taking his car or cash, so Nassir thought he would get both back. He was wrong.

Instead, prosecutors filed a separate civil forfeiture action to take his property. They almost certainly would not have been able to claim his car or his cash through a criminal trial since the supposed offense carried such a light punishment. But in civil forfeiture, the property, and not the person, is on trial.

Civil forfeiture is a process already prone to abuse, but in Philadelphia property owners were at an even greater disadvantage than typical.  Property owners were summoned to Courtroom 478 at City Hall, but there was no judge in the room. The show was run by prosecutors, the same people who filed the forfeiture actions and who stood to benefit financially from successful forfeitures.


When Nassir appeared in Courtroom 478, he was told to fill out paperwork, which he had to complete without the benefit of a court-appointed attorney. He was told to come back in another six weeks for another hearing. At that second hearing, prosecutors told Nassir he could get his car back only if he paid the $1,800 in storage fees that had been piling up.

Without his car, Nassir’s 10-minute car commute turned into a 45-minute ordeal requiring two buses. He eventually bought another car, which required a new loan and cost him more to insure because it was financed.

Philadelphia started to reform its abusive forfeiture system only after Nassir and other city residents filed a class action lawsuit with the Institute for Justice. The bad press from the suit (which included a segment on Last Week Tonight with John Oliver) persuaded the city to negotiate a settlement. The settlement included both mandated reforms and a fund to compensate its victims.

Because Philadelphia abused many people over many years, more than 30,000 people were eligible for compensation. This made it possible for the Institute for Justice to survey victims and release a report, “Frustrating, Corrupt, Unfair: Civil Forfeiture in the Words of Its Victims,” released just this week.

The major findings confirm what has long been speculated about civil forfeiture’s victims. First, it is a process that disproportionately targets disadvantaged communities. Two-thirds of survey respondents were Black, 63% earned less than $50,000 annually and 18% were unemployed. And forfeitures clustered in predominantly minority and low-income areas, like where police seized Nassir’s car and cash.

Similar to how Philadelphia went after Nassir for empty baggies, law enforcement typically wasn’t using civil forfeiture to fight serious crime. Only 1 in 4 survey respondents was ever convicted of a crime. And like Nassir, many of those who were convicted pleaded to low-level offenses that were eventually scrubbed from their record. Moreover, half of all reported seizures were worth less than $600. One respondent even said police seized his crutches.

The report also found that fighting civil forfeiture, difficult for anyone, was even harder for the working poor. In Philadelphia, missing a single court date often meant losing your property forever. Yet prosecutors would frequently reschedule court dates with little or no notice, forcing people to go to court a half-dozen times or more to resolve their case. This chicanery put people with less flexible work schedules at a great disadvantage. Additionally, survey respondents with less education were less likely to get their property back.

This report, for the first time, paints a picture of who suffers when the scales of justice are tipped in the direction of the government. The stories in the report reinforce why civil forfeiture needs to be eliminated. If the government is going to take someone’s property, it should charge them with a crime and take that property as part of a criminal trial in which it has proven the person guilty beyond a reasonable doubt. Anything less violates the principles upon which the United States was built.

No more waiting! Get the legal advice that you need.

When the DEA seized a significant amount of money from my house, I didn't know what to do. I didn't think I would get any of it back. Fortunately, a friend of mine referred me to Jacek Lentz. Jacek's knowledge of the forfeiture laws and experience enable him to get the best possible results. He went right to work as he is aware of the very strict time limitations set by the government and got me back all of my money--$160,000! It is vitally important to choose a lawyer who knows the forfeiture laws inside and out and is well-connected. You couldn't do better than attorney Jacek Lentz. He is simply the best there is!

Our son had his money confiscated on a charge that was not true. Jacek was able to help with his criminal case as well as getting his money back that was taken from him without any cause from the police. I very highly recommend him!

From the beginning of my process of trying to recover my funds which were seized by the DEA, Mr. Lentz was very professional and gave me tremendous guidance during a very frustrating time. He did not give me false hope but did what most attorneys don't and gave me the honest facts. He explained the process to me and I understood that his vast experience and relationships gave me a higher likelihood of receiving my funds back. Throughout the process, he would touch base frequently, always be available for my questions and keep me on task with information he needed to do his job. I felt I had someone very strongly going to bat for me. In the end, I got the best case scenario--I received all my funds back which I definitely did not expect. I recommend him to anyone needing these services. You will be taken care of in the utmost professional manner.

Contact a Competent Asset Forfeiture Defense Attorney Near Me

Whereas government agencies will make it appear like they have every right to seize your property since you, your household member, or your loved one is accused of an offense, don’t listen. Whether the connection between the criminal activity and the property in question is strong enough is for the court to decide. Contact Asset Forfeiture Attorney law firm today at 888-571-5590 to schedule a complimentary consultation and case evaluation. We serve clients throughout California and nationwide facing asset forfeiture.