Our law firm has been contacted by dozens of individuals, seeking advice from an experienced and qualified asset seizure/forfeiture attorney, regarding the seizure of their private safe deposit boxes on Monday March 22, 2021.  Most individuals who contacted us are in a state of shock to see most or all of their life savings confiscated.  This is what we know thus far, as of the time of this article, based upon information we have garnered: 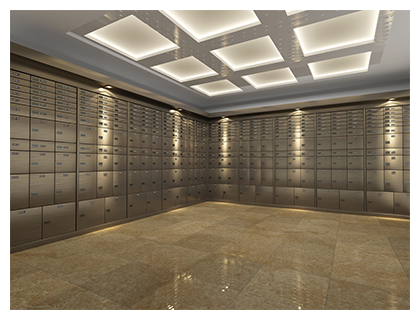 Law enforcement consisting of police units from the Federal Bureau of Investigation (“FBI”), Drug Enforcement Administration (the “DEA”)  and from the U.S. Postal Inspection Service (“USPIS”) raided a facility owned by a company called U.S. Private Vaults located at a strip mall at 9182 West Olympic Blvd in Beverly Hills, California.  The facility was located next door to Mail Box & Services.  U.S. Private Vaults advertises and offers its services as “the private alternative to bank safe deposit box rentals.”  To the best of our knowledge, about 1500 boxes were seized pursuant to a federal search warrant.  The boxes were taken and transported to the FBI Los Angeles headquarters located in Westwood.  The sheer number of seized safe deposit boxes is truly stunning and it is hard to believe that all of them were related to illegal activity that could be grounds for the filing of either criminal or civil asset forfeiture charges.  The federal agencies involved appear to recognize that a significant overreach has happened as the government apparently set up a process by which some of the boxes and their contents would be returned to their owners as soon as possible, without triggering a federal civil asset forfeiture or some other legal process.  It is impossible to speculate how many boxes the government will be willing to return quickly and how many will be determined as being tainted by some kind of illegality.  In order to keep the boxes for future legal proceedings, criminal or civil, the government will need sufficient reasonable suspicion or probable cause that the confiscated cash and other types of valuable property found in each individual box has some relationship to something illegal.  We do not know whether the government’s targets included actual drugs, proceeds of drug sales or other items related to other illegal conduct.

According to law enforcement, they have obtained evidence that contents of a significant number of the seized safe deposit boxes were or might be linked to some illegal activity.  The DEA involvement in the matter suggests that the suspicion involves drug/narcotics trafficking as well as money laundering.  It is possible that a significant number of the safe deposit boxes were owned by individuals who were suspected of being part of the same illegal scheme or conspiracy.  It is also possible, perhaps even likely, that U.S. Private Vaults is suspected of direct involvement or at least some level of knowledge that the boxes were used to store proceeds of drug sales or of some other illegal conduct.

Because of our experience and our exclusive focus on practicing asset forfeiture law, our firm is not surprised to hear that a company offering “private safe deposit boxes” became a target of a federal criminal and/or civil asset forfeiture investigation.  We know from experience that all kinds of “private” services (i.e., unregulated or less regulated services), such as private jet flights, unavoidably attract the attention of law enforcement.

For decades, the idea of private vaults or safe deposit boxes has been promoted as a solution for the cannabis industry given that federal law and regulations bar the cannabis industry from being able to rely on regular mainstream banking services, regardless whether marijuana cultivation and distribution is legal under the law of a given state.  As banks regularly refuse to provide services to them, individuals and organizations involved with cannabis always face a critical problem of being forced to use cash for their transactions without the ability to store it safely by, among other things, depositing and converting it into legitimate bank deposits.  This situation has always presented an absurd dilemma.  On the one hand, the cannabis industry has been forced to do business exclusively in cash; on the other, the use of cash has been used against the industry as evidence that the transactions were intended to be secretive and illegal. It's a catch-22.

To be clear, marijuana cultivation and distribution has been and continues to be unequivocally illegal under federal law despite growing legalization at the state law level.  The number of states which have decriminalized or fully legalized cultivation and distribution of marijuana for either recreational or medicinal use only, has been growing by leaps and bounds.  The federal government has often deferred to state law and refrained from criminal and civil prosecutions if and when cannabis cultivation and distribution was legal under state law.  However, it is our opinion that in recent years, this trend has been reversed as we have been seeing more prosecutions regarding seizures and forfeiture of property related to cannabis as of late. We feel that in recent years the federal government has taken on a more uncompromising stance towards marijuana and marijuana profits.

U.S. Private Vaults advertises its services in a way which was destined to attract individuals with a need for a higher level of privacy and less scrutiny.  Their safe deposit boxes were advertised as “private and confidential.”  Among other things, U.S. Private Vaults required little or no personal information usually required by banks and other regulated financial institutions. Most critically, the company advertised that it did not need their customers’ social security numbers.   Undoubtedly, this heightened level of anonymity and privacy was highly attractive to a great number of individuals, whether they were involved in anything illegal or not.

Another enticing proposition in addition to increased protection, anonymity and privacy by U.S. Private Vaults was the fact that biometric data was used for access to the boxes.  Specifically, the company advertised that the customers’ iris scans were the sole source of authentication and identification.  The company advertised that its iris recognition technology was used with other layers of security and that it maintained “airtight” security.  One Yelp review advertised that the company offered “top notch security of assets for owners seeking anonymous storage.”  The same review stated, “they have the 4th Amendment displayed, which I thought was cool.”

No doubt U.S. Private Vaults made sales propositions to individuals who valued increased privacy and protection from detection and seizures.  We can only speculate whether the raid of the company and the seizure of private safe deposit boxes by a sweeping federal investigation was meant to target unlawful gains of crime or whether it was also a signal to what could be called the privacy or wealth defense industry.  What is clear is that increased security and privacy can be a double-edged phenomenon and that the very same thing that deters law enforcement and police scrutiny is what often attracts its attention.